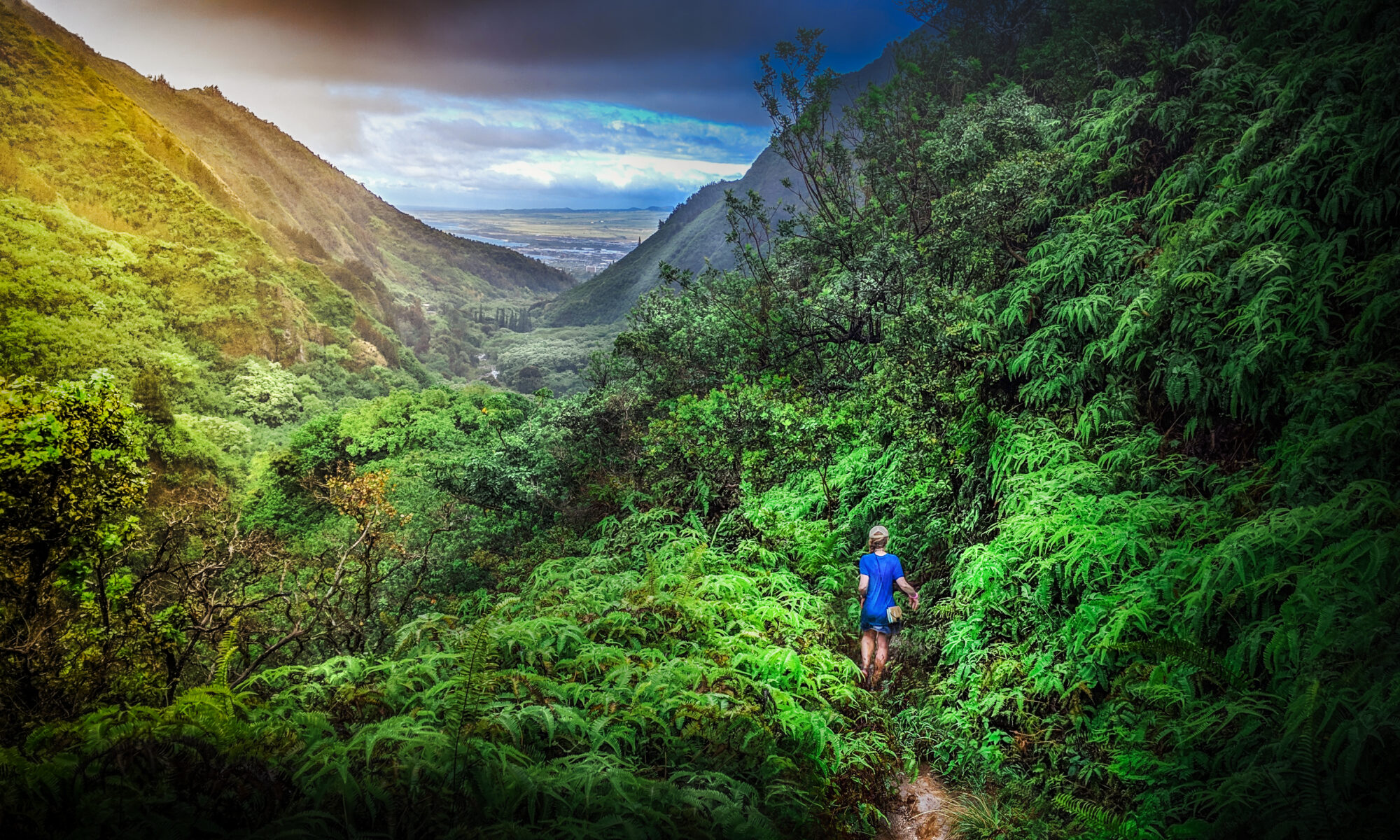 The sacred Iao Valley State Park in Maui is short on “official” hiking trails to explore, but a quick hop over a railing to an ancient Hawaiian trail is all that lies between you and adventure.

$5 per vehicle, credit card only

First off, let me say that legally I must officially discourage you to attempt this hike, and that some of Hawaii’s trail closures are off limits for a good reason.

If a trail isn’t closed due to 1) impending certain death, 2) harmful effect to the natural or spiritual landscape or 3) good ol’ trespassing, many assume the “trail closed” signs to be nothing more than an absolution of liability.

The Iao Tableland trail, a.k.a. the Iao Valley “Secret” Trail (with emphasis on the air quotes) may technically require a hiking permit from property owners of the former Wailuku Agribusiness which held much of the sugarcane and macadamia industry in this area.

However, no one is policing this hike, no state laws are cited in the trail closure sign, and quite honestly the land owners would probably prefer not to be called by every curious Tom, Dick and hiker.

That being said, since we first published this post it has become the number one Google search result for the keywords “Iao Valley couple died going past the railing.”

Bottom line: Be respectful of this place because you’re probably not supposed to be there.

Don’t litter, and if you see any trash pick it up and pack it out as a sort of payment to this land.

I think it’s a fair trade.

A climb of 133 steps leads you to a sheltered lookout. To the left you’ll see a sign beyond the railing enclosure stating:

NOTICE
Area Closed!
Do not go beyond this sign.

That’s the trailhead. From here begins about a two-hour round trip of often steep hiking, rain and mud.

It is the second wettest place in Hawaii, so definitely count on the rain.

And the mud. So much mud.

We were immediately swallowed by the jungle.

This place is incredibly fertile, and at times we found plants so enormous we felt as though we’d been transported to the set of the movie Honey I Shrunk the Kids.

In ancient times, Hawaiians held an annual makahiki festival in this valley to honor Lono, the god of agriculture.

It is a well-defined and old trail. Warriors fought bitter battles here, sometimes with casualties so high that the bodies clogged the streams and turned them red with blood.

It was also a religious center for Hawaiians and a burial place for important chiefs. From The Hawaiian Annual for 1932:

“lao has the famous hidden cave of Maui. It is at Hapio, joining the side next to Kakae at Kalakahi. Its place of entrance is said to be in the water. A second opening is in the smooth cliff on the south side of the valleys. It is a very noted cave from ancient time, wherein are all the famous kings, those of supernatural power, men of strength, wizards and all experts belonging to the kings who practiced wizardry … Some hundred of celebrities are there interred. In the year 1736 was the last famous death. There is no man left of those who know lao’s burial cave.”

Near its end, the trail becomes a more vertical muddy scramble with large roots as footholds and small trees and shrubs as leverage for pulling upward.

As we pressed on, the jungle canopy cleared and our protection from the rain vanished. We were soaked, but we were happy.

This was paradise for us.

Ahead, we saw what we believed to be the final ascent to our mysterious destination. A mother/daughter hiking duo stood at the base looking unsure of themselves.

“Is that the summit?” we asked.

“I think so,” the daughter replied, “but this is where we turn around.”

Our eyes gazed upward at the daunting elevation ahead and thickening gray brume.

There were no two ways about it, navigating this last slough was going to be damn hard.

The other hikers departed, but the twinkle in Kat’s eyes said no way were we stopping this close to the end.

There was no time for me to argue — Kat began lifting herself up to the steep finale.

I cinched my pack a little tighter and followed her lead.

Whatever was up here had better be good, I thought.

A sudden heavy downburst of rain, then only a couple drops, then another soaking.

The bill of my hat dripping a steady cascade, I grabbed a mud-slicked root, then another.

Two more big slippery steps up, one last puuuullllll … and we had made it. The trail plateaued and led us a hundred more feet to our reward.

There, in stark contrast to its surroundings, a decidedly lopsided yet dramatically-framed tree greeted us.

But was it really a tree at all, or had we startled one of the old wizards of this place who hadn’t enough time to fully consider his changeling shape?

Rooted in the center of our path forward, it seemed to say, “I’ve been so lonely up here, won’t you stay a while and visit?”

Immediately to the left, the trail made a sharp detour down the other side of the hill, but we knew our limits.

We would go no farther, opting instead to keep the company of our gnarled mystic host.

From here we were treated to commanding 360-degree views of the Iao Valley and saw clouds seemingly being born from the jungle below.

Somewhere beyond to our west was the Wall of Tears, a popular yet hidden cluster of waterfalls near the summit of Puʻu Kukui in the West Maui Mountains, but heavy afternoon fog had rolled in and obscured that view.

We breathed in the humid rainforest air and feasted our eyes on the undulating viridescent hues of tree tops, ground cover and sacred peaks surrounding us.

With the afternoon sun quickly falling and the park closing soon, we bade farewell to our host and apologized for not knowing his name.

We should give the tree a name.

I think it was a she.

Is the Iao Tableland Trail dangerous?

Although we felt safe on this trail, parts of the trail do follow a ridge that becomes slick when wet. Flash floods in the Hawaiian jungle are common, so be sure to check the weather before venturing out.

When is the best time to hike this trail?

Clouds form late in the day, and the West Maui Mountains are one of the wettest places on Earth. We were squeezing this hike in late in the day, but if we did it again we’d hit the trail first thing in the morning.

Is this hike illegal?

It’s technically trespassing to hike the Iao Tableland Trail. However, the laid back Hawaiian culture tends to be incredibly forgiving when it comes to touring the countryside, and many consider posted warning signs to be nothing more than an absolution of liability. Be careful, be respectful and leave no trace.

What is the cost to enter?

Iao Valley State Park has an entry fee of $5 for non-Hawaii resident vehicles.

What are the hours?

Iao Valley State Park is open daily from 7am to 6pm.

The Perfect Day On Maui’s East Coast: Hana to Kipahulu

One Reply to “Hiking Iao Tableland Trail – A Forbidden Journey”