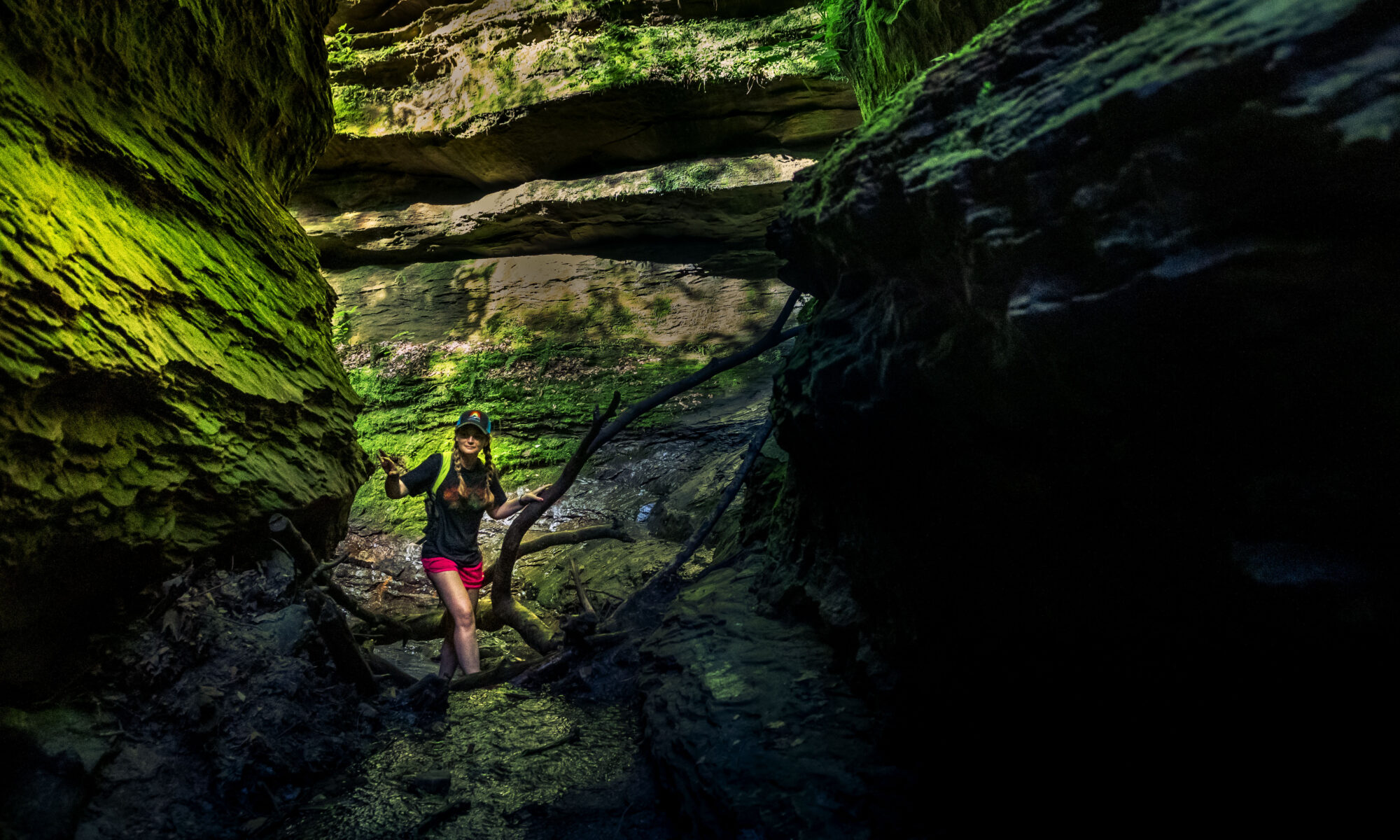 Nestled among the planate farmlands of west central Indiana lies an alien landscape where time stopped 12,000 years ago. About an hour outside of Indianapolis, Turkey Run State Park is an easily-accessed popular Midwest treasure for hiking an ecosystem normally found in northern Minnesota, Wisconsin and Michigan.

You’re going to give a history lesson, aren’t you?

It’ll go fast. I need to set this up.

I’m on the edge of my seat.

During the Carboniferous Period some 300 million years ago, a deposit of sand at the mouth of an ancient extinct river slowly compressed into rock, which glaciers later carved into canyons.

It’s right here in the brochure.

Turkey Run gets its name, it is believed, from pioneer days when turkeys huddled together in the winter for warmth in its wind-sheltered canyons. Today, thousands of people visit the park annually, especially during the summer when these sandstone bottoms remain cool despite soaring temperatures. And with a sizable Amish population nearby with no air conditioning, don’t be surprised to meet a number of traditionally-dressed locals looking to escape the mid-day heat.

I liked the Amish people we met.

There are lots of great day hikes in the park, and the interconnected trail system is easy to customize for most ages and abilities. We were interested in seeing the canyons, so we drew up a trail game plan that included as many of them as possible. Starting out at the Nature Center, we made our way across across Sugar Creek on a huge pedestrian suspension bridge and continued straight on trail #3 to Wedge Rock.

Rocky Hollow is where things get interesting, and if you weren’t already aware that at times the trail IS the creek, you might not be sure that you’re going in the right direction. There were plenty of fellow hikers ahead of us assuring others that this indeed was still the right way, so we followed behind them without question. I was happy to have worn my waterproof hiking boots, but Kat was soon wet-footing it in her trail runners.

It wasn’t that bad, but I do wish I’d packed a second pair for afterwards.

From Rocky Hollow we took the short trail detour to Punch Bowl, a place we might have stayed longer to explore on another day. The sounds of a lazy stream trickling into the shallow pool was a soothing respite from a somewhat rowdy gaggle of hikers that we decided to let pass. It was a busy weekend at the park, but that’s to be expected in the summer.

Nothing to see here

Trail #3 soon intersects with trail #10, which turns north to a feature on the map known as “Camel’s Back.” It piqued our interests, so we decided to have a look. At the trail’s terminus stands an enclosed viewing platform with a sweeping panorama of … A bird’s-eye perspective of …

Nothing. It was nothing.

It was pretty disappointing. I’d post a picture, but there really wasn’t anything to … I mean, maybe you can see something in the winter?

Standing there scratching our heads, we watched as two other hikers dipped under the railing to the left and proceeded along another trail. We decided to follow, but there really wasn’t much to see other than a heavily-rooted ridge, which may or may not have been the actual Camel’s Back. We saw the end of the trail and turned back, unimpressed.

We reconnected with trail #3 and made the descent down the “140 Steps.” It was actually more like 70 steps to a creek bed, and at the bottom we weren’t sure where the trail picked up. I mistakenly led us up the creek a quarter mile before Kat convinced me I was going in the wrong direction.

I was right. Again.

Once we were pointed back in the right direction, we were met with the “Ladders” portion of the trail, which is exactly what it sounds like. There are three ladders to descend here, and regardless of whether you continue on to trail #5 or #3 at this junction, you will have to negotiate at least one ladder. Although well maintained and sturdy, these ladders are still a little awkward and may present problems for some.

We continued on trail #5 where we soon found the second half of the “140 Steps” — this time heading back up to the forest floor — which gave our legs a workout. Near the park’s western border we entered Boulder Canyon, an aptly-named and gorgeous passage that was scooped out long ago by glacier erratics swirling in the Pleistocene Epoch meltwaters.

Reading from the brochure again?

Turning back, the trail toward Falls Canyon and Ice Box hugs Sugar Creek, which in the summer is as lively as any water park.

Canoers, kayakers and clumps of tied-together inner-tubers create a cacophony of music and laughter that you can’t help but smile about. Here the trail becomes less about nature and more about people watching. Hoosiers are generally known for their hospitality, but they’re also known to have a good time. Of course we’re a little biased.

There is so much more to explore, but by the end of our trek we were satisfied. The park impressed us by how much it has to offer, and we promised ourselves we’d be back.

Next time we might even throw our own little party on Sugar Creek.

And I’m going to dunk you in the swirling meltwaters!

I was really happy with my Columbia Newton Ridge waterproof boots on this hike. My feet stayed totally dry, even when the creek got deep enough that water went over the laces. The price is great too for anyone looking to save money on a product that seems to get a little outrageous at times. We’re just walking on rocks, not trying to dunk basketballs people! Anyway, the link:

Following her wet-footed adventure, Kat was inspired to finally get her own pair of hiking boots for those days when trail runners just aren’t going to cut it. After much consideration, she decided at last on-

Yes, Clorts — that household name brand we’ve all come to know and love. As in, “Hey ma, have you seen my Clorts?”

Shush you. I got a good deal!

Clorts, if you’re out there listening, I’ve got a great campaign idea for you. DM for collabs!