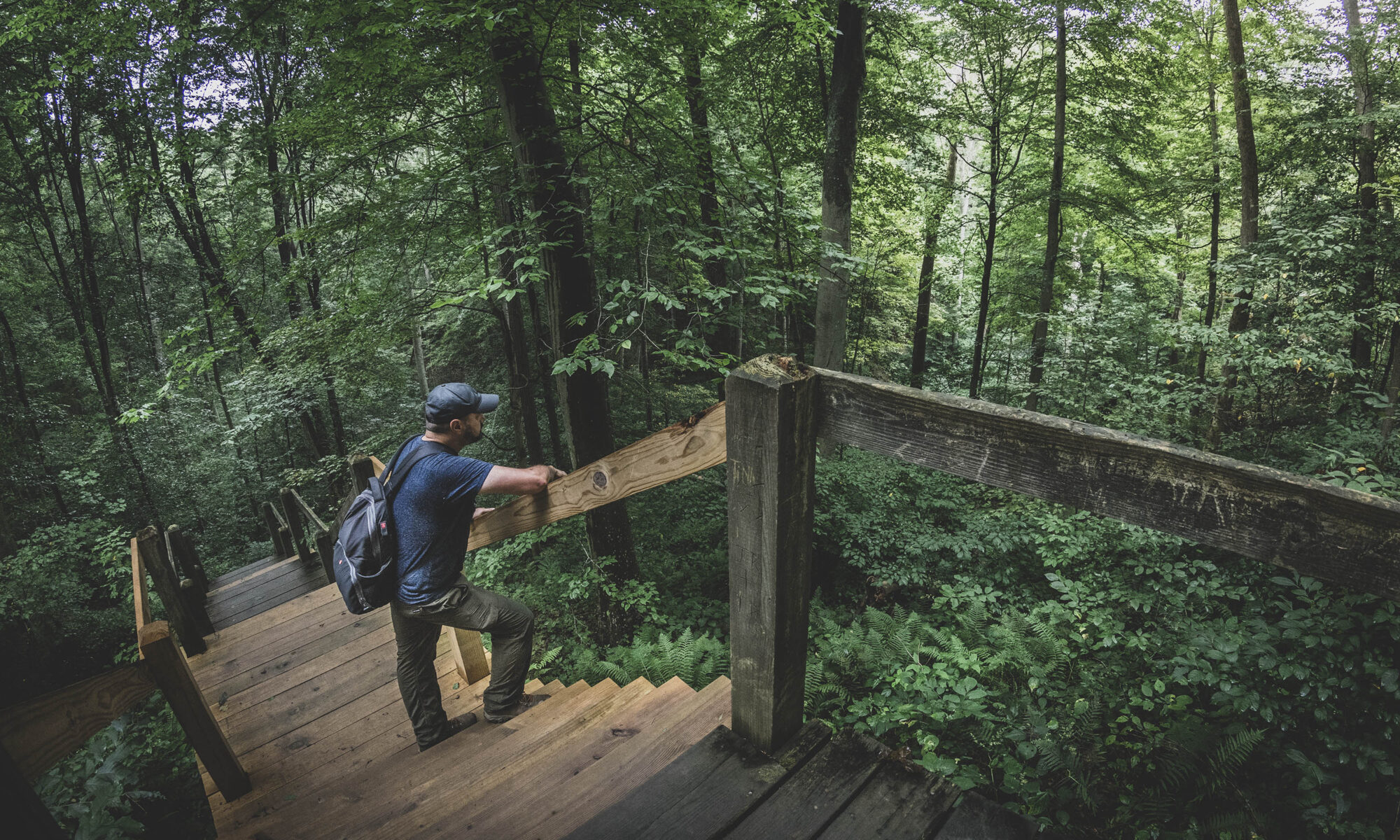 If you’re looking for the rare yellowwood tree, Ogle Hollow in Indiana’s Brown County State Park is the place to find it. Follow along with the hiking trail interpretive guide for a relaxing and educational visit to this mesic upland forest.

Designed and constructed by the Hoosier Hikers Council, Trail 5 includes 17 stations and begins with a wooden box containing interpretive trail guides to follow along on your hike. Because the box is sometimes empty, we’ve included the brochure’s contents below:

Ogle Hollow is one of the most beautiful areas in Brown County State Park, and one of the few sites in Indiana where one can find the yellowwood tree. Yellowwoods, not common anywhere in their natural range, are especially rare in Indiana, where they occur in the wild only at a few sites in Brown County. Because of the yellowwoods and the rich biological diversity of the site, Ogle Hollow was dedicated as a State Nature Preserve in 1970.

The forest that occupies these hills and hollows is called a mesic upland forest. The term mesic refers to the overall moisture of the soils available to the plants that grow here, and means that Ogle Hollow is a site of medium moisture levels – neither very wet nor too dry.

Moisture is one of the factors that determine what plants will grow at a site; other factors are sunlight and nutrients. Although Ogle Hollow is a “mesic” forest, the soils on the slopes can be fairly dry, while in the hollows they can be quite wet. Trees such as oak, hickory, beech and yellowwood prefer the drier soils on the slopes, while others such as tulip tree, sugar maple and sycamore thrive in the moister conditions at the bottom of the hollow.

In addition to changing moisture levels, the amount of sunlight also varies. It is helpful to think of forests as having three zones of vegetation: 1) the canopy, 2) the understory, and 3) the floor. The canopy is formed by the tallest trees and receives the most sunlight. The understory occupies the area just under the canopy and is usually shady, except where a gap in the canopy lets sunlight penetrate.

It is occupies by smaller trees and shrubs that can tolerate the shady conditions. The floor is also usually shady and is where you find ferns as well as wildflowers, welcomed by so many of us during spring and summer.

These zones provide food, shelter and nesting spaces for a wide variety of insects, birds and mammals, interacting to form a natural community or ecosystem.

Much of Brown County sits atop Indiana’s famed “knobstone escarpment,” a 150-mile long ridge that rises several hundred feet above the flatlands to the east and north. The trail begins atop this dry ridge, one of countless others characteristic of the escarpment. A common tree of knobstone sites is the chestnut oak, which in Indiana is found almost completely in the hilly southern part of the state.

These small understory trees with the smooth, gray bark are called paw-paws. The paw-paw’s maroon flowers open in the spring before the leaves and resemble an upside-down trillium. The 3 to 6-inch greenish fruits taste like a banana, giving this plant its other common name, “Indiana banana.” Paw-paws send of lots of shoots from their roots, forming thickets like this one.

The large oblong hole in the trunk of this ash was was made by a pileated woodpecker searching for insects. There are several species of woodpeckers in Brown County – the pileated is one of the largest and most colorful of its woodland birds. Hairy, downy, red-bellied and red-headed woodpeckers are also found in the woodlands. All are common and can often be seen at backyard suet feeders in the wintertime.

With its smooth gray bark and massive upright habit, American beech is one of the most easily recognized of all eastern hardwood trees. Beechnuts are an important food source for a variety of birds and mammals, and few of them survive to sprout. The beech sends up shoots from its shallow roots, much like the paw-paw does, and often an entire grove may consist of just a few trees. The beauty of this tree has been marred, as have most of the beeches along this trail, by people carving their initials into the bark. Please DO NOT carve into the bark of beech trees! In addition to leaving scars that are visible for decades, the wounds provide an opportunity for diseases to invade the tree.

Brown County yellowwoods are isolated by a least one hundred miles from other populations growing in northern Kentucky. Yellowwoods are easily mistaken for American beech because of their smooth, gray bark, but with a closer look there can be little confusion between the two. The beech leaf is spear-shaped with a saw-toothed edge, while the yellowwood’s leaf is made up of 5 to 11 leaflets that are egg-shaped and have smooth edges. Beeches are single-trunked for most of their height, but yellowwoods often fork close to the ground. Dead leaves often cling to the twigs of beeches for most of the winter, while those of the yellowwood do not, providing another useful clue to separating them. In Indiana yellowwoods are listed as a state endangered species.

The exposed shale bank on the opposite side of the streambed was formed millions of years ago when this area was covered by a shallow inland sea. The shale is made up of layers of clay that have become compacted over the millenia, forming a soft easily fractured stone. The shale banks are extremely fragile and have been severely eroded by people recklessly climbing on them. Please DO NOT climb on the banks.

Big trees abound in Ogle Hollow because the woods here have been left undisturbed for many years. This American sycamore measures more than 3 feet in diameter. Sycamores grow best in moist, rich soils along streams and riverbanks. Look up into the upper branches and you will see the patchy “camouflage” bark that makes this tree easy to identify.

Ferns and wildflowers carpet the forest floor throughout Ogle Hollow, but grow especially lush in this moist bottomland. Ferns are distinct from most other plants because they do not flower and reproduce from spores rather than seeds. Some of the common ferns in this area are maidenhair fern, Christmas fern and broad beech fern.

Many of the wildflowers that grow in woodlands such as trout lily and great white trillium bloom in spring and disappear by early summer. Other wildflowers like the celandine poppy remain long after flowering, and a few others like spiderwort will bloom happily in the shade throughout the summer.

No two plants can occupy the same ground, but this beech and maple are trying. Usually when two trees try to grow in the same spot, one or the other will be able to make better use of the available light, water and nutrients and will edge the other out. These two trees, called “kissing trees,” have been competing for the same spot for decades, with neither getting an edge on the other, and have become joined at the base.

Along the trail through Ogle Hollow you will see many trees like this one that have been toppled over by wind. These “tip-ups,” as they are called, are important to the forest ecology. As the trees topple, the roots bring important minerals to the surface. The cavity left by the root mass provides shelter for wildlife. A variety of insects, fungi and other organisms quickly invade the trunk and begin the process of decomposing it.

Already polypore mushrooms have colonized the trunk. Their special “roots,” called mycelia, penetrate the bark, helping to break it down. Eventually this tree will disappear, perhaps leaving just a slight mound and depression where the upturned root mass once was.

In 1931 the Indiana Legislature designated the tulip tree as the official state tree. Its smooth, straight trunk made it popular with settlers for building cabins, and today the strong, light wood is used for furniture and cabinetry. Tulip trees grown on a variety of sites in moist, rich soils. This impressive specimen measures 3 feet in diameter.

This stream flows only during the wet seasons of winter and spring. In summer it dries up to just a few still pools here and there, unless a heavy downpour comes along to fill it temporarily. In spite of its “on again, off again” nature, this temporary stream performs a necessary role in the Ogle Hollow ecosystem. It helps control moisture by draining away excess snowmelt and rainfall. It also provides a source of water for wildlife and is critical to insects, amphibians and reptiles that complete one or more of their life cycles in water.

Ravines like this one are important in the Ogle Hollow ecosystem. First and most important, they channel water from the surrounding slopes into the stream at the bottom of the hollow. This prevents the rest of the slopes from being eroded by heavy rainfall and excessive snowmelt. Water running through these ravines carries down with it minerals and organic matter that accumulate in the hollow and helps form the rich bottomlands you have just crossed.

Even in an area as seemingly unspoiled as Ogle Hollow, signs of human disturbance are not hard to find. This power pole is what remains of a power line that used to cross this site. Such disturbances are not always bad – putting in the power line meant cutting down trees, but this opened up the understory and ground layer to increased sunlight, allowing many of the plants growing there to thrive.

Everything that dies here in Ogle Hollow will eventually find its way to the forest floor where, along with animal droppings, it will be broken down by a variety of insects, fungi and microscopic organisms. In the process, nutrients are returned to the soil where they can be used by other plants.

This is a good place to examine the understory in Ogle Hollow, which is made up of shrubs and young trees that can tolerate the shade created by the lofty trees in the canopy. Common shrubs of the understory include spicebush and wild hydrangea. Spicebush is the host plant for the spicebush swallowtail butterfly whose larvae feed on its leaves.

Looking across the ravine you can see the trunk of a tree that fell several years ago, leaving the opening in the canopy in front of you. Notice that the paw-paws and other trees are rapidly growing to fill the gap. In a few years the opening will have disappeared.

The large tree you see before you that looks like it’s shedding its bark is the familiar shagbark hickory. Hickories produce a thin-shelled nut similar to a pecan, which is a favorite food for squirrels and humans alike. The shaggy bark, which gives this tree its name, provides shelter for the rare Indiana bat. Indiana bats are listed as an endangered species both federally and in the state of Indiana.

Use map for real-time navigation

Load this web page on your phone before heading to the trail. Once there, be sure to put your device in airplane mode in order to save battery life.

Simply tap the map marker icon on the map to show your current location and follow along.

Tap the layers icon to switch between topographic, satellite and other helpful map layers. Be sure to check out the Heatmap overlay to see where others have gone before you!