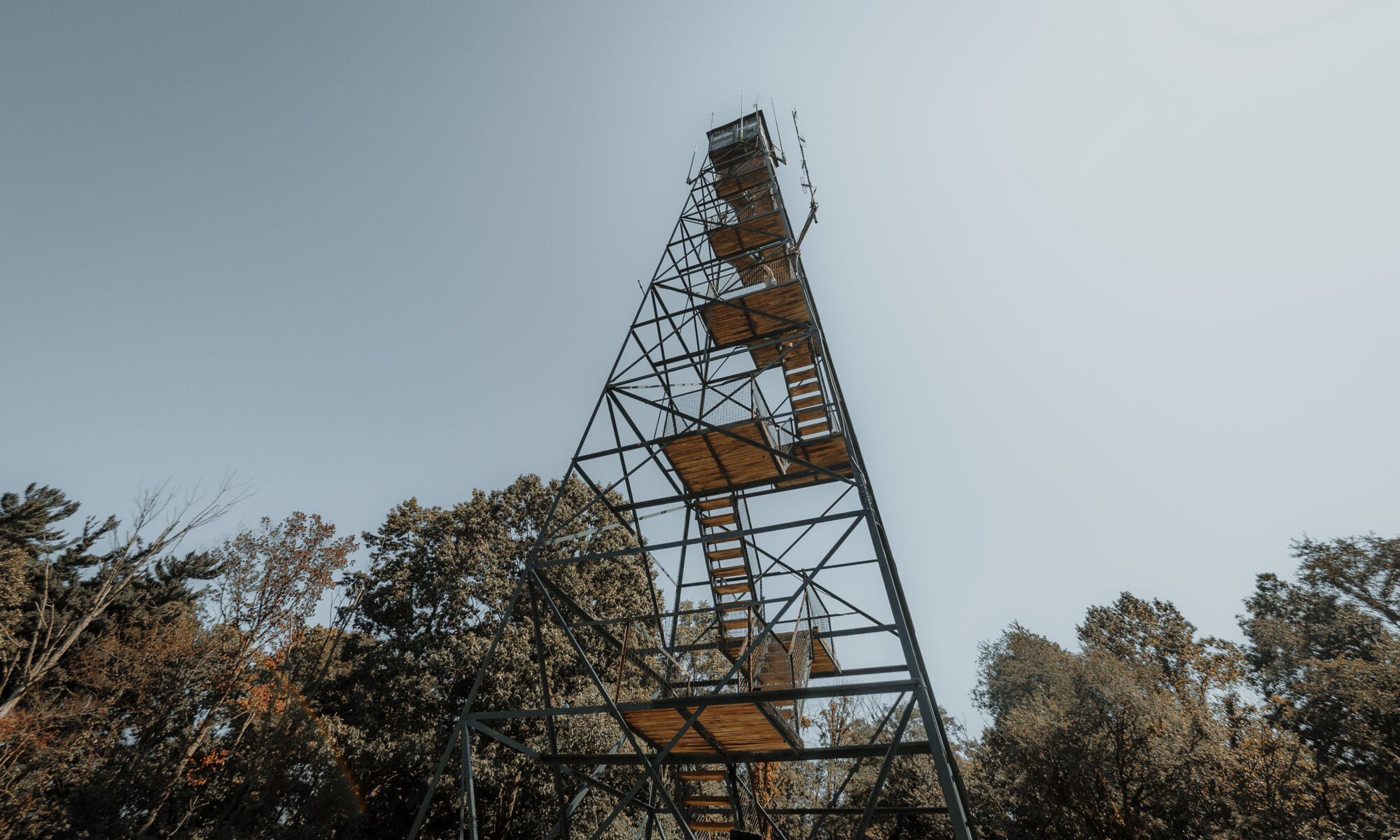 Imagine a hike where the coolest feature was at the very beginning of the trail, and everything after that was of decreasing interest. Welcome to Trail 10, where the fire tower is as good as it gets. That said, the fire tower is super cool and a can’t-miss feature in the park, so it’s definitely worth checking out.

You can use this interactive map at the trail! Here’s how

Trail 10 (FireTower) trailhead. From the north park entrance, head south on Brown County State Park Road two miles. Continue .8 miles on Horseman Camp Road. Between the park office and the fire tower is a small lot for parking, and the trailhead is at the fire tower.

First, What About This Awesome Fire Tower?

Built in the 1930s on the highest ridge in southern Indiana to help protect against the spread of fires, the fire tower in Brown County State Park now serves as a radio communications and public observation tower.

From the Indiana Department of Natural Resources:

This fire tower was part of a network of towers that once protected Indiana.

In 1930, Indiana began constructing a series of fire towers with the goal of having no visibility gap. By 1952, Indiana had 33 towers, most of them in the southern half of the state.

Fire towers were generally equipped with communication equipment (radio and telephone), a psychrometer to measure humidity and determine fire danger, and an alidade to determine the exact location of a fire.

An alidade, sometimes referred to as an Osborne Fire Finder, consisted of an oriented topographic map on a circular disk. Moveable sighting apertures were opposite each other on the disk. The fire lookout lined the apertures on a plume of smoke and determined the line on which the fire was located.

Another fire tower lookout did the same process, and the fire was located where their two lines crossed.

Many Indiana lookouts were local farmers, recruited when the fire danger was high. Sometimes a wife or other family member would serve as lookout. Lookout duties included watching for smoke, locating and reporting suspicious smoke plumes, taking weather readings, communicating with fire crews during a fire, recording fires, keeping the area around the tower mowed and keeping the outhouse clean.

Lookouts had to pass a vision test and be able to climb the tower several times. During WWII, many of Indiana’s lookouts were women.

By the 1970s, planes replaced fire towers as the means of locating fires. Today, fires are reported by local residents.

The fire tower at Brown County State Park stands as a sentinel, reminding us of the time when Indiana was protected by a series of towers staffed by dedicated lookouts.

I don’t mean to be so down on this trail, but it is one of my least favorites. The fire tower itself is really neat – I just wish the tower was the ultimate destination for Trail 10. Instead, the structure is right next to the parking lot.

From the trailhead, Trail 10 points northeast for about a mile down into a ravine before looping back.

There isn’t much more to discuss other than the fact that there is also a small shelter along the way, which might normally pique a modicum of interest had you not just scaled an awesome rickety old fire tower (which is a thing you absolutely must do).

Assuming you take Trail 10 in a counterclockwise route – which is the way we did it the last time we were there – you’ll hit the CCC Shelter at roughly four-tenths of a mile down the trail.

Oy, some trail report, huh? If you’re just looking to stretch your legs with the kiddos after visiting the tower, Trail 10 is super convenient. And, if you’re visiting in the fall, of course the Brown County autumn foliage is pretty great just about anywhere you wander.

Bonus: Before leaving the lot, walk north past the park office to Friends Trail, a super short and accessible hike that hides one of the best views in the entire park.

In summary, go see the fire tower. The trail? You can skip it. There are much better offerings in the park as detailed in our trail overview The Best Hiking Trails in Brown County State Park, with Maps and Rankings .

There is actually a much, much better route to hike so that the fire tower IS the ultimate trail destination, buuuut it’s an unofficial trail and the naturalists at the park asked us not to share it. Erosion is a concern, so it’s best to stay on the official trails – even the less exciting ones.

Use this map on your hike!

Load this web page on your phone while you still have service.

Then, tap the arrow icon on the map to show your current location and follow along.

Tap the layers icon to switch between topo, satellite and other helpful map layers.

To save battery life, put your device in airplane mode. GPS still works even without service!